Forgot your password?
Not a member yet?
Register and become a member of KLEYA
Need help?
If you prefer, you can contact us or leave your preferred contact method and time and we will contact you.

Quality of Life
Carnival, a Portuguese Original and its Tradition

We are sure you've heard about the Brazilian Carnival, but did you know that Portugal has celebrated the Carnival since the XV century? YES! It actually began in Portugal and later was set in Brazil in the times of the Portuguese colonization in Brazil!

The most notorious carnival regions in Portugal are: Ovar, Estarreja, Madeira, Loures, Nazaré, Podence, Loulé, Sesimbra, Sines, Elvas, Torres Vedras and Canas de Senhorim! All of them have parades, each with its own twist! This year let us talk about the Caretos de Podence (The Wicker men), which are originally from Podence. The Careto tradition is known to be a pre-historical Celtic religious ritual and one of the oldest traditions practiced in Portugal, that lives on to this day. This tradition represents excess, euphoria, and joy, marking the end of winter and celebrating the fertility season that is brought by the spring season. These festivities are very common in the Northern part of Portugal, such as Trás-os-Montes.

The Caretos portray a diabolic and mysterious image, they are even referred to as “Diabos à solta” (Devils roaming free)- the costume is normally red with fringes, the face covered by a mask made of leather or metal by locals. The Caretos use these to make noise around the village and to run after women, to dance!  It is believed that when a person dresses up as Careto, they gain a dual personality, gaining courage to do things that they would not do on a regular basis! It is said that once dressed as a Careto, one is possessed by a transcendent energy, as if something magical and supernatural takes over the human form. 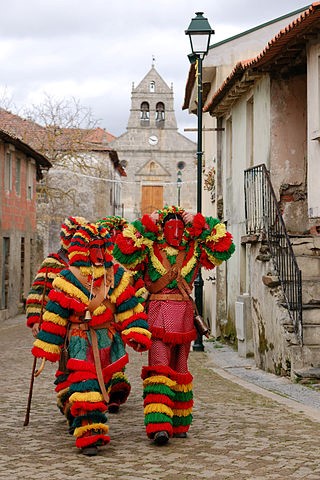 On “terça-feira de Carnaval” ( FAT TUESDAY or Mardi gras as some may know it), the Caretos run around jumping and screaming along the village, disturbing the peace! The Caretos are followed by the “Facanitos” which are younger boys that follow the Caretos, thus learning the ways to keep the tradition alive. Nowadays, even girls can be Caretos! Normally they go into the Careto way of life by Family Heritage, and the costume or parts of it are even passed down from generation to generation.

The festivities can last up to 10 days, being the days before Carnival day the most important! There are even fake weddings on the Sunday before Fat Tuesday, gatherings that bring humour and where protesting against the ceremony is not allowed. Later on Carnival day (Tuesday) there is a parade and later at night the Shrovetide season is marked by the “Queima do Entrudo” that marks the pre-lent season where old things are burnt to make room for the new things that are to come, thus representing the closing of one season and beginning of another.

Today the Caretos de Podence, are part of the UNESCO as an Intangible Cultural Heritage of Humanity!

Even though Carnival won’t be celebrated the same way this year, let us hope that this is the beginning of a new season as well.

Learn more about the historical and beautiful heritage with this video made by the Caretos de Podence!

The Portuguese have so much tradition and the culture is very much alive!

Come make part of this beautiful heritage, with Kleya!