Forgot your password?
Not a member yet?
Register and become a member of KLEYA
Need help?
If you prefer, you can contact us or leave your preferred contact method and time and we will contact you.

EU rules make it easy to travel to another EU country (in this case the 27 EU countries + Norway and the United Kingdom) with your dog, cat or ferret. These rules also cover travel to the EU from a country or territory outside the EU.

With a few exceptions, your pet can travel with you to another EU country or from a non-EU country to an EU country if it has:

Travel documents for your pet dog, cat or ferret

A European pet passport is a document, which follows an EU standard model and is essential for travel between EU countries. It contains a description and details of your pet, including its microchip or tattoo code as well as its rabies vaccination record and contact details of the owner and the vet who issued the passport. You can get a European pet passport for your dog, cat or ferret from any authorised vet (permitted by the relevant authorities to issue pet passports). A pet passport is valid for life as long as your pet’s rabies vaccination is in date.

If you are travelling to an EU country from Andorra, Switzerland, Faroe Islands, Gibraltar, Greenland, Iceland, Liechtenstein, Monaco, Norway, San Marino, Vatican City State, your pet can also enter the EU with a pet passport issued in one of these countries.

An EU animal health certificate is another type of document, which contains specific information about your pet (identity, health, rabies vaccinations) and is based on an EU standard model.

If you are travelling from a non-EU country or territory, your pet must have an EU animal health certificate endorsed by an official State vet in the country of departure not more than 10 days before your pet arrives in the EU. The certificate is valid for travel between EU countries for 4 months from this date or until the anti-rabies vaccination expires, whichever lapses first.

In addition, you should also complete and attach a written declaration to your pets EU animal health certificate stating that its relocation is for non-commercial reasons. This declaration is also required if your pet is travelling under the responsibility of a person authorized by you. In this case, your pet must be reunited with you within 5 days of your relocation.

Pets travelling without their owner

As a rule, pets must travel with their owners; however, you may give written permission to another person to accompany your pet for you (this written declaration is described above). You must however be reunited your pet within 5 days of its relocation.

If your pet is travelling unaccompanied, it will have to comply with animal health rules which apply to the import or trade of dog’s cats or ferrets into the EU.

Travelling with more than five pets

You can travel with up to five pets, but if you there are more than five pets (dogs, cats or ferrets) you must provide proof that:

If you are travelling with more than 5 pets (dog, cats, or ferrets) and you do not meet any of the exceptions mentioned above, your pets have to comply with animal health rules which apply to the commercial import of animals into the EU.

Travelling with other pets

European pet passports are issued for dogs, cats and ferrets only. If you are travelling to another EU country with any other pets, such as birds, ornamental aquatic animals, reptiles, rodents or rabbits, check the national rules of the country you are planning to visit for information on the entry conditions.

A - To enter Portugal with your dog, cat or ferret, without commercial character, the animal must have:

(Animals identified by tattoo performed before 3.7.2011 may circulate in the E.U document provided that such tattoo is clearly legible).

2 - A valid rabies vaccination performed in animals at least 12 weeks of age.

The date of administration of the rabies vaccine may not be earlier than the date of application or (registered) reading of the microchip.

In the case of a first vaccination (first rabies período de tempo vaccine), it is considered valid after a period of at least 21 days after the date of completion of the vaccination protocol.

If it is a rabies revaccination, that is, if it is not a first rabies vaccine, this revaccination is valid immediately, and the animal can travel soon after having been revaccinated, provided that any revaccination has been carried out within validity of the previous vaccination.

3 – A Eu pet passport issued by a veterinarian authorised by the competent authority of the country of origin, attesting to the identification and vaccination of the animal.

Passports issued from 29.12.2014 must comply with the model of the new passport set out in Part 1 of Annex III to The Commission's Implementing Regulation (EU) No 577/2013 of 28 June – which have security features, consisting of the assumption of a transparent adhesive film on the section III page - Marking of the animal on page 6 of the passport after filling out.

In addition, where a field to be filled in the passport is taken in the form of a sticker, it can only be used if it is guaranteed that it is self-destructed in an attempt to remove or if the area to be filled is sealed with a transparent adhesive Film.

If the animal is not transported by its owner, the natural person authorized by the owner or the natural person designated by the transporting undertaking, must be in possession of a written Declaration, signed by the owner of the animal, authorizing that person to carry out, on his behalf, the movement of the animal without a commercial character. Such Declaration shall contain the code of the microchip or tattoo identifying the animal and shall be drafted in capital letters, at least in Portuguese and English.

The entry into Portugal of non-commercial dogs from countries outside the European Union, of the following breeds considered potentially dangerous and their crossings:

Shall be permitted however, a veterinary control of the animals concerned should be made at traveler’s Entry Points, and the following documents should be filled:

DISABILITY TERM - Stay in Portugal for less than 4 months

NOTIFICATION OF RESIDENCE - Stay in Portugal for more than 4 months

Only dogs of the breeds indicated above whose registration is in an officially recognized book of origins (LOP and others) are accepted, in which case the holders of these animals must provide this written proof at the Travelers’ Entry Points. 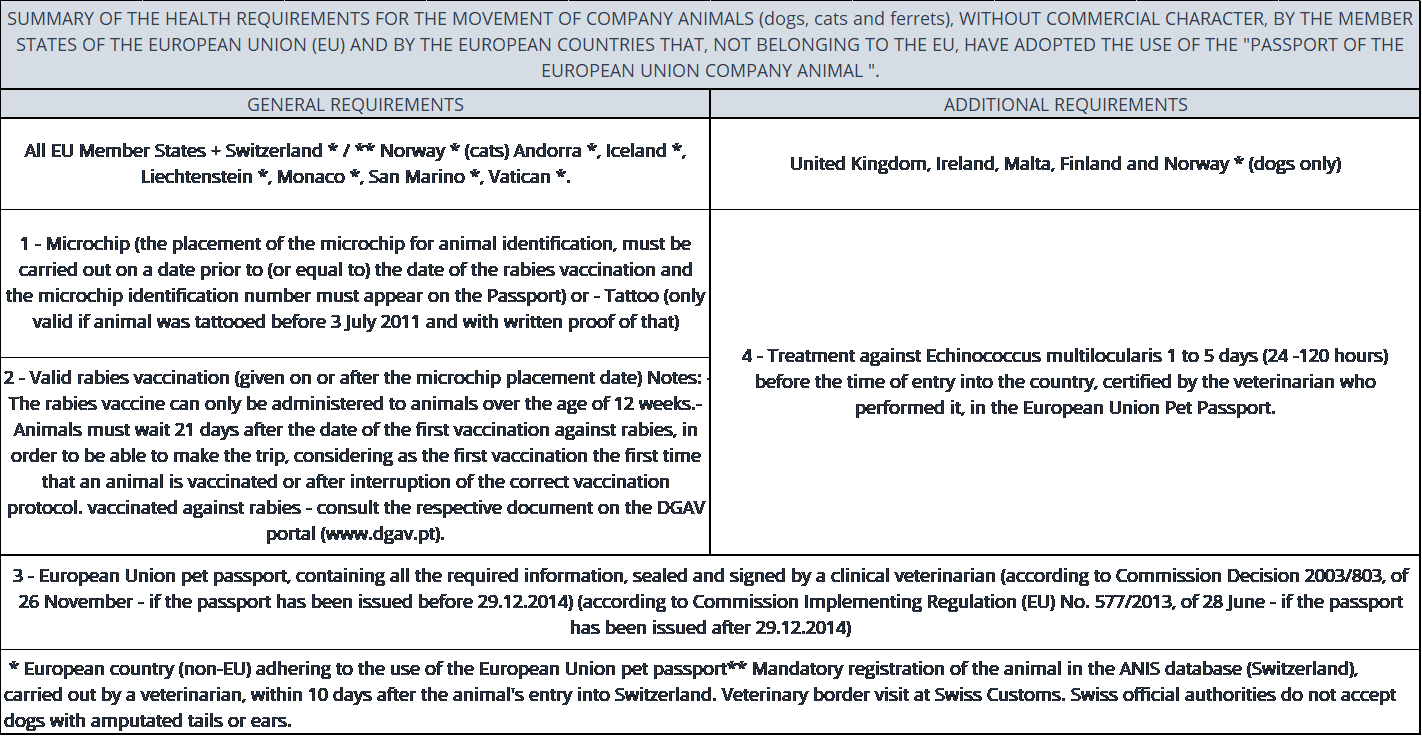 Bringing your pet along is a careful matter, trust Kleya to bring your furry friend safely to Portugal!